Ajay is a co-founder of The Cyber Readiness Institute, first vice chairman of the International Chamber of Commerce and a trustee of the United States Council for International Business.

Ajay is a member of the board of overseers of the Weill Cornell Medical College. In addition, Ajay serves as a director of Dow Inc. and is a member of its compensation and governance committees.

Prior to Mastercard, Ajay served as chief executive officer of Citigroup Asia Pacific. During his career at Citigroup, he held a variety of senior management roles in the United States, Asia Pacific, Europe, Middle East and Africa. He also oversaw the company’s efforts in microfinance.

Ajay began his career at Nestlé, India, where for 13 years he worked on assignments spanning sales, marketing and general management. He also spent two years with PepsiCo, where he was instrumental in launching its fast food franchises in India as the economy liberalized.

He is a graduate of Delhi University and the Indian Institute of Management, Ahmedabad.

Ajaypal Banga is 60, he’s been the Chief Executive Officer of Mastercard since 2020. There are 7 older and 18 younger executives at Mastercard. The oldest executive at Mastercard, Inc. is Jackson Tai, 70, who is the Independent Director.

Ajay Banga is happily married to Ritu Banga a better half in every step of his life. They attend events together showing the togetherness as a role model to others.

Banga, incidentally, served as co-chair — along with his wife Ritu — of the Entertainment Industry Foundation’s Stand Up To Cancer’s “New York Standing Room Only” event April 9. The glittering fundraiser honored SU2C co-founder and award-winning journalist Katie Couric for her dedication to cancer advocacy. 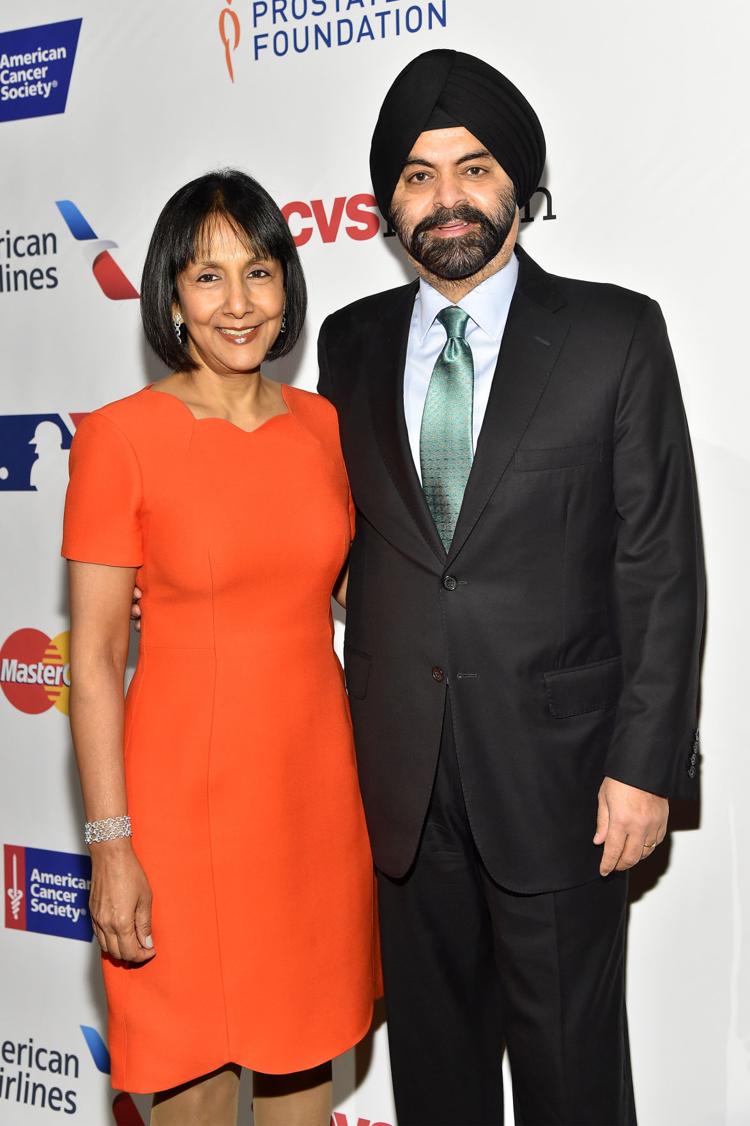 Banga was born in 1960 in Saini sikh family in Khadki, Pune, Maharashtra, India where his father, an army officer, was posted. His family is originally from Jalandhar, Punjab. His father, Harbhajan Singh Banga is a retired lieutenant-general who served in the Indian Army. He is the younger brother of businessman M. S. Banga.

Banga grew up and attended schools across India, successively in Secunderabad, Jalandhar, Delhi, Hyderabad, before finishing his schooling in Shimla.

His primary education was completed at the Hyderabad Public School in Begumpet. Banga went on to graduate with a Bachelor of Arts (Honours) degree in Economics from St. Stephen’s College, Delhi University followed by PGP in Management (equivalent to MBA) from the Indian Institute of Management, Ahmedabad.

As the Chief Executive Officer of Mastercard, the total compensation of Ajaypal Banga at Mastercard is $23,250,000. There are no executives at Mastercard getting paid more.

Beginning his business career with Nestlé in 1981, Banga spent the next 13 years working in jobs spanning sales, marketing, and general management. He later joined PepsiCo and was involved in the launch of its international fast food franchises in India as the economy liberalized.

Banga was vice chairman of the board of trustees of the New York Hall of Science and a board member of the National Urban League. He was formerly a business sponsor of Citi’s African heritage network – NYC.

Banga has a keen interest in social development issues, and over the period from 2005 to mid-2009, he spearheaded Citi’s strategy in the microfinance sector across the world.

Banga is a regular speaker at various FinTech conferences and various leadership conferences. He also appeared on the Mad Money show hosted by Jim Cramer on Thursday, 6 Nov 2014.

Banga, was the keynote speaker at the NYU Stern 2014 Graduate Convocation on May 22, 2014, where he spoke about the importance of diversity in driving innovation and leadership. He also was a keynote speaker for his alma mater, the Indian Institute of Management, Ahmedabad, during the Class of 2015’s convocation.

In 2020 he was elected chairman of the International Chamber of Commerce succeeding Paul Polman. He previously served as ICC’s First Vice-Chair since June 2018.

Mastercard, Inc. operates as a technology company. The firm engages in the payments industry that connects consumers, financial institutions, merchants, governments and business.

It offers payment solutions for the development and implementation of credit, debit, prepaid, commercial and payment programs. The company was founded in 1966 and is headquartered in Purchase, NY.

He was director for Marketing and Business Development at PepsiCo Restaurants International India from 1994 to 1996 and began his career at Nestlé India, working in sales and management roles from 1981 to 1994.

Banga has served as a member of the Advisory Committee for Trade Policy and Negotiations since 2015. An alumnus of the Indian Institute of Management, Ahmedabad, he is also a member of the Board of Directors of the Dow Chemical Company, the Board of Governors of the American Red Cross, the Council of Foreign Relations, and serves as chairman of the Financial Services Roundtable and co-chair of the American India Foundation.