Anthony Albanese is an Australian politician serving as Leader of the Opposition and leader of the Australian Labor Party since 2019. He has been member of parliament for the division of Grayndler since 1996. As Infrastructure Minister and Communications Minister, Anthony Albanese delivered nation-building projects. connecting the country through thousands of kilometres of roads and rail and rolling out the high-speed fibre NBN. Albanese was Deputy Prime Minister of Australia in 2013 and a Cabinet Minister in the Rudd and Gillard Governments from 2007 to 2013.

He joined the Labor Party as a student, and before entering parliament worked as a party official and research officer. Albanese was elected to the House of Representatives at the 1996 election, winning the Division of Grayndler in New South Wales. He was first appointed to the Shadow Cabinet in 2001 and went on to serve in a number of roles, eventually becoming Manager of Opposition Business in 2006.

After Labor’s victory in the 2007 election, Albanese was appointed Leader of the House; he was also made Minister for Regional Development and Local Government and Minister for Infrastructure and Transport. In the subsequent leadership tensions between Kevin Rudd and Julia Gillard from 2010 to 2013, Albanese was publicly critical of the conduct of both, calling for unity. After the final leadership ballot between the two in June 2013, Albanese was elected Deputy Leader of the Labor Party and was sworn in as Deputy Prime Minister of Australia the following day.

A Newspoll conducted for The Australian on Sunday found Labor candidate Anthony Albanese was the popular choice for the upcoming election. If his party wins, Mr Albanese will be sworn in by Governor-General David Hurley as 31st Australian prime minister. 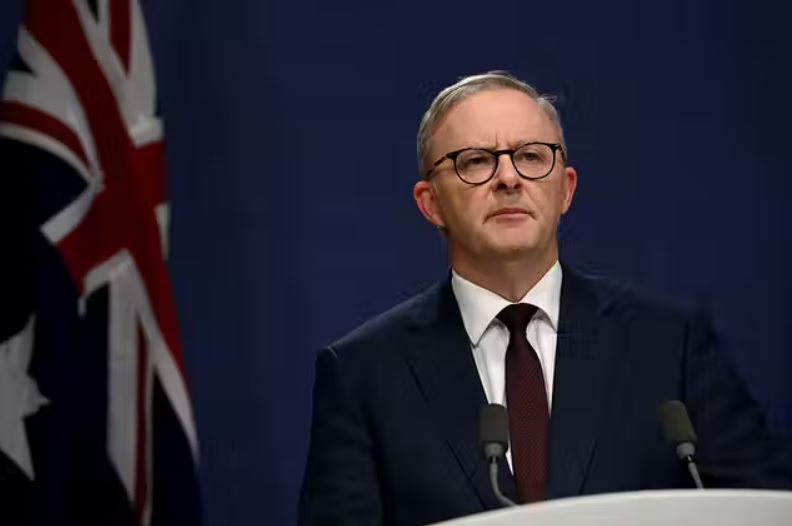 Anthony Norman Albanese was born on March 2, 1963(age 58 years) in Sydney, Australia. He is the son of Carlo Albanese and Maryanne Ellery. His mother was an Australian of Irish descent, while his father was from Barletta, Italy. His parents met on a cruise ship but did not continue their relationship afterwards, going their separate ways. Growing up, Albanese was told that his father had died in a car accident; he did not meet his father, who was in fact still alive, until 2009, tracking him down with the assistance of the Australian Embassy in Italy. He subsequently discovered that he had two half-siblings.

Anthony Albanese was educated at St Joseph’s Primary School in Camperdown and St Mary’s Cathedral College. His mother Maryanne raised him by herself in public housing, and Albanese would later say that she had raised him with “three great faiths: the Catholic Church, the South Sydney Football Club and Labor”, adding that he had always remained faithful to the latter two.

After finishing school, he worked for the Commonwealth Bank for two years before studying economics at the University of Sydney. After completing his economics degree, Albanese took on a role as research officer to the then-Minister for Local Government and Administrative Services, Tom Uren, who would become a mentor to him. In 1989, the position of Assistant General Secretary of the New South Wales branch of the Labor Party became vacant when John Faulkner was elected to the Senate. The election to replace him was closely disputed between the Labor Left’s Hard Left and Soft Left groupings, with Albanese being elected with the backing of the Hard Left, taking on that role for the next six years. In 1995, he left the position to work as a senior adviser to New South Wales Premier Bob Carr.

Anthony Albanese was married to Carmel Tebbutt, a future Deputy Premier of New South Wales, they had their wedding in 2000. They have one son, named Nathan. Albanese and Tebbutt separated in January 2019. In June 2020, it was reported that Albanese was in a new relationship, with Jodie Haydon.

Albanese describes himself as “half-Italian and half-Irish” and a “non-practising Catholic”. He is also a music fan who reportedly once went to a Pogues gig in a Pixies shirt and intervened as Transport Minister to save a Dolly Parton tour from bureaucratic red tape. In 2013, he co-hosted a pre-election special of music program Rage and his song selection included the Pixies and Pogues alongside the Smiths, the Triffids, PJ Harvey, Hunters & Collectors and Joy Division. 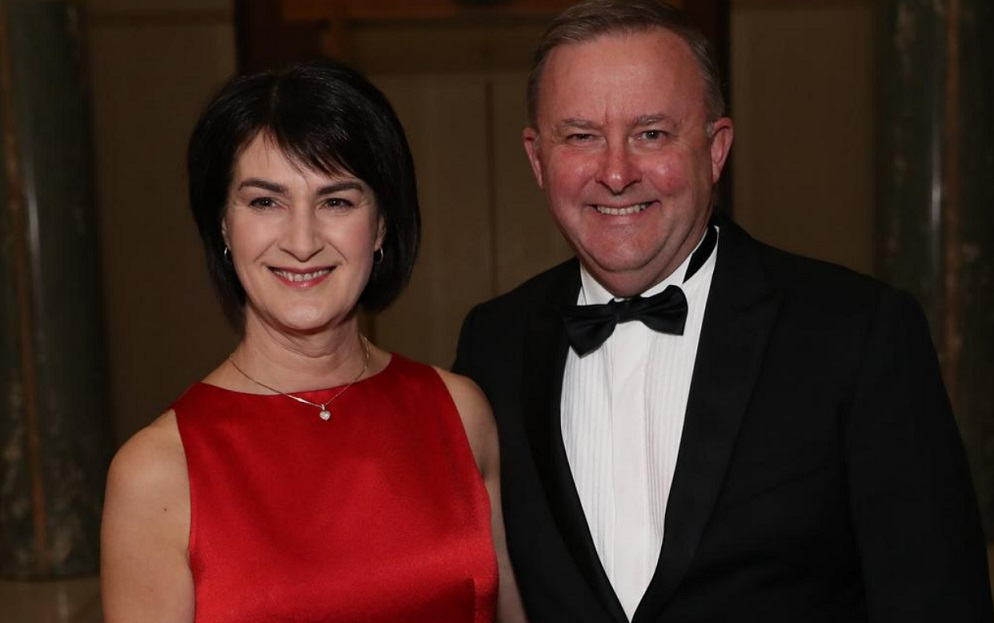 Anthony Albanese is estimated at around $10 million. His salary is around $415,000. He is one of the richest politicians in Australia. However, as a lifelong supporter of the South Sydney Rabbitohs, he was a board member of the club from 1999 to 2002 and influential in the fight to have the club readmitted to the National Rugby League competition.

Following the defeat of Labor at the 2013 election, Albanese announced his candidacy to be Leader of the Labor Party, standing against Bill Shorten. Shorten was announced as the winner after a month-long contest that was the first to involve a combined vote of MPs and rank-and-file members. Although Albanese won comfortably among party members, Shorten held a greater lead among MPs, and was duly elected.

Leader of the Opposition

Bill Shorten announced his resignation as Leader of the Labor Party on 18 May 2019, following Labor’s unexpected defeat in the 2019 election. The day after, Albanese announced his candidacy in the subsequent leadership election. On 21 May, Chris Bowen announced he would also contest the ballot; however, the next day, he announced his withdrawal, citing his lack of support among the party membership. With no other candidate stepping forward, Albanese took the leadership unopposed on 30 May, with Richard Marles as his deputy. Aged 56 when he took office, he is the oldest first-time Opposition Leader in 59 years, since Arthur Calwell (aged 63) took office in 1960.

Anthony Albanese has described his political views as progressive, and he is aligned with the Labor Left. He is in favour of a republican Australia and supports replacing the current constitutional monarchy.

Albanese is in favour of legalising voluntary euthanasia. He is a supporter and advocate for LGBT rights, and often participates in the annual Sydney Gay and Lesbian Mardi Gras. Albanese opposed holding a plebiscite for same-sex marriage, stating that “we shouldn’t be having a public vote where we get to judge other families”. In 2017, Albanese voted “Yes” to the Marriage Amendment (Definition and Religious Freedoms) Act 2017, which posed the question of if same-sex couples should be allowed to marry.

While serving in the Gillard Government, Albanese supported the introduction of carbon pricing, and voted, along with the rest of the Labor Party, to establish the Clean Energy Act 2011, which instituted a carbon pricing scheme in Australia. After the Abbott Government abolished the scheme in July 2014, Albanese stated that carbon pricing was no longer needed, as “the circumstances have changed”.

It was revealed that Opposition leader Anthony Albanese had found love again with Jodie Haydon, after his devastating split from wife Carmel Tebbutt. Ms Haydon is a Labor member who previously worked in finance and has been dating Mr Albanese since early 2020 after his marriage broke down. The pair met in early 2020 at a conference in Melbourne where Mr Albanese was speaking.

The pair posed for the March edition of Women’s Weekly at his home in Marrickville, inner-west Sydney.

Mr Albanese revealed he wooed his new girlfriend with a date at a hipster brewery near home. 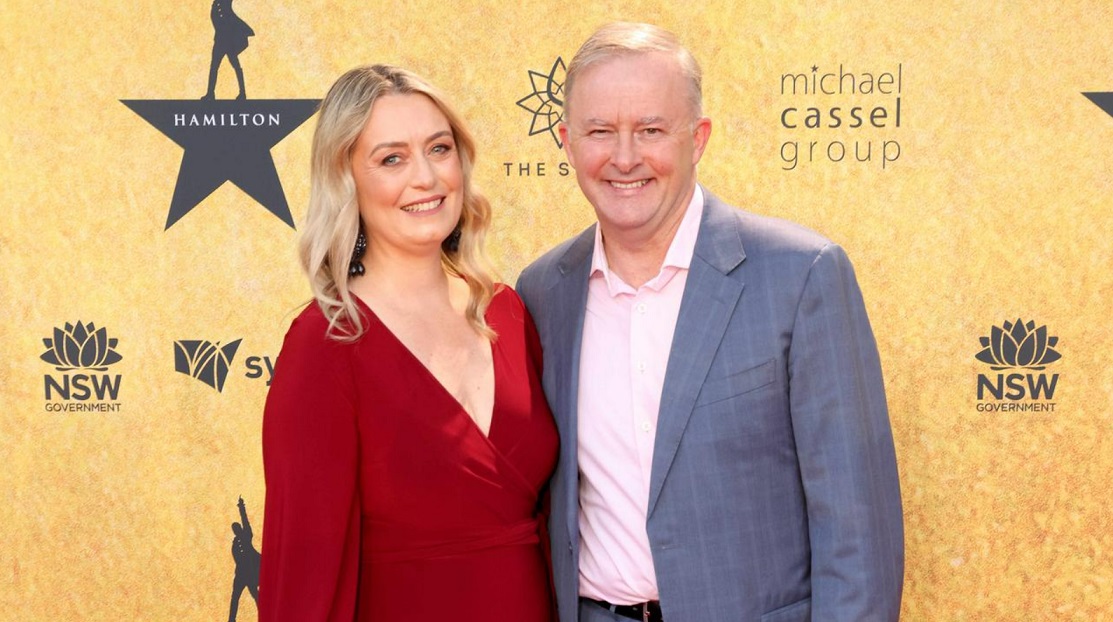 Albanese was injured in a side collision while driving in Marrickville, New South Wales, on 8 January 2021. He underwent treatment at Royal Prince Alfred Hospital and was reportedly “injured externally and internally and had suffered a considerable shock in the immediate aftermath of the impact”. The other driver was a 17-year-old teen who received a ticket for negligent driving. Emergency workers have told Albanese that if the teen’s car had hit just 30 centimetres on either side of where it did, Albanese “would almost certainly have been killed”.

In October 2009, The Sydney Morning Herald reported that Albanese had opposed an attempt to appoint the former Liberal Prime Minister John Howard to a senior position in the NRL. Albanese stated he had phoned the NRL chief executive, David Gallop, as well as other league officials, to advise them against the idea. He then implored officials at South’s to help stop the suggestion from gaining momentum. In 2013, he was made a life member of the club.

vijesh - 0
Violett Beane is an American actress, best known for her role as Jesse Wells/Jesse Quick in The CW's The Flash, as well as Markie...