Eileen Gu also known by her Chinese name, Gu Ailing was born in 2003 in San Francisco. Her father is American and her mother is Chinese. She is an American-born freestyle skier, two-time Olympic gold medalist, and model. She has competed for China in halfpipe, slopestyle, and big air events since 2019. Eileen Gu started skiing when she was only three years old and became champion of the junior group of the USA Snowboard and Freeski Association at the age of nine, before entering the senior ranks when she was just 13. She earned her first World Cup victory at the FIS Freeski World Cup Slopestyle in Seiser Alm, Italy, when she was 15 in January 2019.

Then, on June 6 of the same year, she announced that she would be representing China competitively via her Instagram account. (Eileen had been competing for the US in international events since the 2017–18 season.) Proving her dedication to the sport, Eileen set herself the goal of graduating after completing two years of high school in just one year. A feat she duly accomplished.

While still in high school, Eileen put down a real statement of intent at the 2020 Youth Games in Lausanne, Switzerland, taking Halfpipe gold and Slopestyle silver. She then further cemented her credentials at her first X Games appearance at the 2021 event in Aspen, making history as the first-ever female rookie to win three medals after taking gold in both Ski Slopestyle and Superpipe, as well as a bronze in Ski Big Air.

Two months later Eileen once again demonstrated her huge potential, securing bronze in Big Air and claiming gold in both the Halfpipe and Slopestyle competition at the FIS Freestyle Skiing World Championship in Aspen. The 2021-22 campaign saw her take her first-ever crystal globe from the FIS World Cup. She put together a flawless Halfpipe season to finish undefeated. Eileen deferred entry into Stanford University until the summer of 2022 in order to focus on the Winter Games in Beijing. That decision paid off big time, with gold medals in Freeski Halfpipe and Freeski Big Air and silver in Freeski Slopestyle. 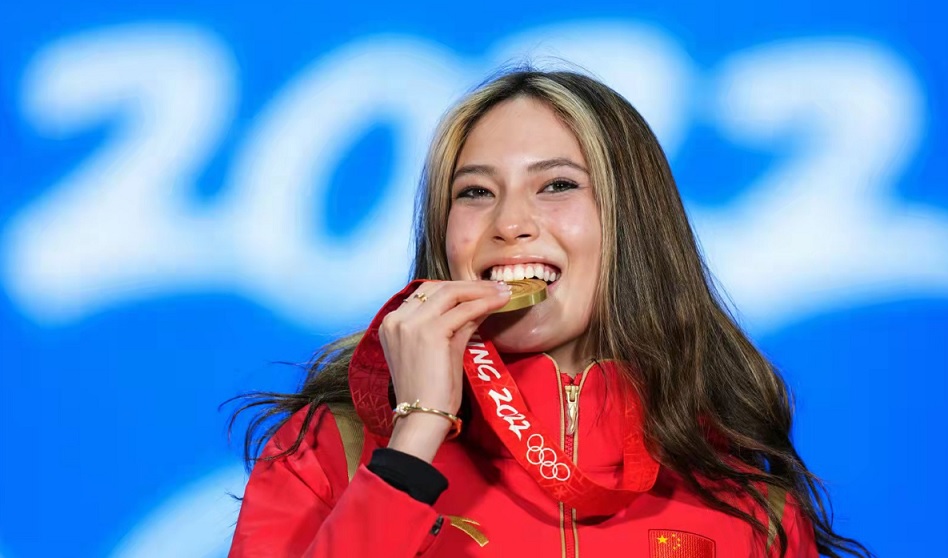 Eileen was raised in San Francisco’s Sea Cliff neighborhood, according to the NYT. She shares a home with her mother and maternal grandmother Feng Guozhen. Her bedroom had a view of the Golden Gate bridge.
Eileen is fluent in Mandarin Chinese and has visited relatives and friends in Beijing most summers of her life, according to the NYT.

On Instagram, she mentions that she was working at a summer camp in Beijing when she heard the news that the Winter Olympics would be held in the city.

Eileen has publicly spoken about her choice to compete for China, writing on Instagram that it was an “incredibly tough decision” for her to make. “I am proud of my heritage, and equally proud of my American upbringings,” she wrote.

“The opportunity to help inspire millions of young people where my mom was born, during the 2022 Beijing Olympic Winter Games is a once-in-a-lifetime opportunity to help to promote the sport I love. Through skiing, I hope to unite people, promote common understanding, create communication, and forge friendships between nations. If I can help to inspire one young girl to break a boundary, my wishes will have come true. 🇺🇸 🇨🇳 ❤️”

Probably. Eileen has never publicly confirmed that she gave up her U.S. citizenship, according to ESPN. However, the International Olympic Committee requires athletes to hold passports for the countries they represent, and China does not recognize dual citizenship.

Because China does not allow dual citizenship, the government has encouraged the public to report people secretly holding two passports, according to CNN. There are very few exceptions to the ban, and it’s unlikely that the government would make an exception for even an Olympic athlete, said Donald Clarke, a professor at the George Washington University Law School specializing in Chinese law. 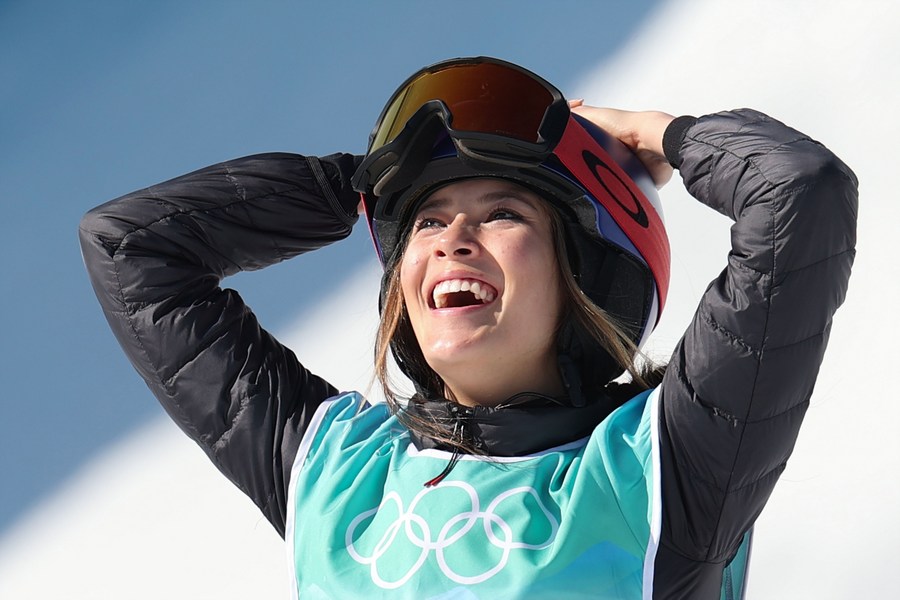 Eileen’s mom, Yan, emigrated from China about 30 years ago and raised Eileen as a single parent, according to the Times. Yan used to be a ski instructor at a resort near Lake Tahoe and usually travels with her daughter. Yan studied biochemistry and molecular biology at Auburn University and molecular genetics at Rockefeller University, per Forbes. She’s also worked in investment banking at companies in New York and California, and has worked as a private investor and expert in China for Fusion Investment.

While attending the latter, her mother skied for the first time at Hunter Mountain in New York state; her passion for the sport deepened after relocating to the San Francisco Bay Area while earning an MBA at Stanford University. While there, Gu’s mother put her young daughter into ski lessons at Lake Tahoe, reportedly so that her daughter could keep up with her. Her mother, as Gu put it, “accidentally created [in me] a pro skier.”

He’s kind of a mystery. The Times mentioned that he’s American and graduated from Harvard, but there’s no public record of him and she doesn’t talk publicly about him. Not much is shared or known about Eileen Gu Father may be they wanted to keep the matter private. However some articles have suggested Eileen Gu Father as an American and white. This would let people focus on Eileen Gu rather that who her father is.

Gu, 18, won gold in the women’s Big Air competition in Beijing on Tuesday, beating off competition from France’s Tess Ledeux with a final jump score of 94.5.

According to CNN, Gu dominated searches on Weibo in the wake of her victory, with seven of the 10 top trending topics all about her triumph. As of around 9.30 a.m. ET Tuesday, the top trending story on the site relates to Gu’s mother’s comments about her victory.

Fans on her Weibo, where she has over 2.6 million followers, left more than 90,000 comments in less than 30-minutes after her win.

Gu, who stopped representing the United States and began competing for China in 2019, is already a major celebrity in China.

Gu also has a career as a fashion model, and is represented by the agency IMG Models. As of January 2022, she has participated in a number of campaigns, including for Fendi and Gucci, IWC Schaffhausen. and Tiffany and Louis Vuitton. Gu has had multiple magazine covers, including for Elle and Vogue China.

Eileen’s net worth is between $1-5 million USD approx. The main source of Eileen’s income comes from playing skating and modeling. Her primary source of income is her career as a professional skier. Through her various sources of income, she has been able to accumulate good fortune but prefers to lead a modest lifestyle.

Eileen Gu has a massive 1.5 Million followers on her Instagram handle, where she shares her fashionable outfits.

With one gold medal under her belt, Eileen Gu, the 18-year-old American-born Chinese skier, has become a superstar almost overnight in China, charming the country with her superior athletic skills, model looks and standout intellect.

In recent days, however, the outpouring of adulation for Gu on the Chinese internet has been tempered somewhat by a small current of discontent. Some social media users are criticizing her for being unaware of her privileged status after comments she made about internet freedom in China.

It began when a user commented on one of Gu’s Instagram posts before she won the gold medal in the women’s freeski big air event last week.

Most major Western news sites and social media apps like Twitter, Facebook and Instagram are blocked outright in China. Some Chinese, including several Olympic athletes like Gu, can tunnel through the digital border using a VPN, or virtual private network. But VPNs are increasingly difficult to gain access to in the mainland, and the Chinese authorities have punished citizens who have used the technology to scale the system of state-controlled internet filters known as the Great Firewall.

Within days, a screenshot of the Instagram exchange was circulating on Chinese social media. While some people praised Gu for her combativeness, others lashed out at her for being out of touch with the struggle of ordinary Chinese citizens.

vijesh - 0
Producer Dinesh Vijan who has to date been silent on Sushant Singh Rajput’s dying (when actually everybody is aware...