Likewise, McEnany also has an Instagram account with over 2 million followers. The verified user with the handle name @kayleighmcenany has about 717 posts at the moment.

From April 2020 until January 2021, Kayleigh served as the Trump administration’s 33rd White House press secretary as a pundit and author. In addition, Kayleigh is currently an on-air contributor for Fox News.

She began her career in the media as a producer for Mike Huckabee on Fox News and then as a CNN contributor.

During the 2016 Republican Party presidential primaries, she was an outspoken critic of Donald Trump, but she eventually became a strong Trump supporter. In 2017, she was chosen as the national spokesman for the Republican National Committee.

She worked as Trump’s 2020 presidential campaign’s National Press Secretary from 2019 to 2020 and subsequently as a Senior Advisor from October 2020 until January 2021.

In 2017 Kayleigh married Tampa Bay Rays pitcher Sean Gilmartin. They have a daughter named Blake Avery Gilmartin. Sean is currently a minor league player. He did previously play in the Majors with the New York Mets and Baltimore Orioles. He was the 28th overall selection in the 2011 draft, signing a deal with the Atlanta Braves that came with a $1.134 million signing bonus.

Kayleigh is now a regular contributor at Fox News. She frequently appears on the show “Outnumbered” alongside Harris Faulkner, Ainsley Earhardt and Emily Compagno.

McEnany began her political career as a cable news commentator for CNN during the 2016 presidential election cycle. She had previously worked in media at Fox News and made her first appearance on the air in 2011. McEnany left her job at CNN in August 2017 and was named a national spokesperson for the Republican National Committee later that month. In 2018, she published a book with Simon & Schuster titled The New American Revolution: The Making of a Populist Movement. McEnany became the national press secretary for President Trump’s 2020 re-election campaign in February 2019.

McEnany received a bachelor’s degree from the School of Foreign Service at Georgetown University in 2010 and interned for former president George W. Bush (R) as an undergraduate. She received a J.D. from Harvard Law School in 2016. 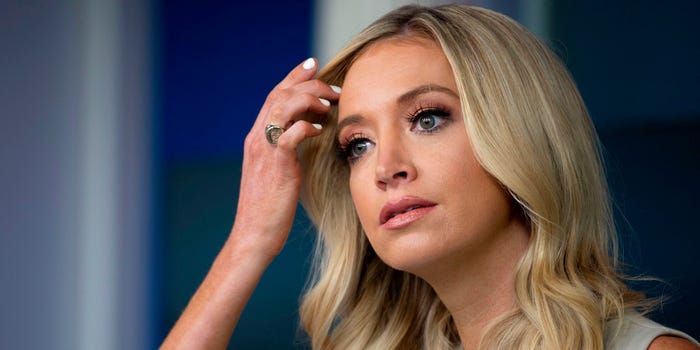 McEnany claimed that the Trump campaign and the Republican National Committee paid her approximately $200,000 in salary and bonuses.

While the reporting period covers a few months before McEnany began working at the White House, according to Salon, the Trump campaign paid her $12,000 after she started her job as press secretary.

McEnany stated that the $12,000 had been returned following Salon’s article, but Salon could not confirm this.

Similarly, although her net worth is yet to be confirmed, she is possibly worthing more than $500 thousand at the moment.

Since 1995, the executive branch of the U.S. government has been required to release a report to Congress that lists every White House Office employee’s name, title, and salary. Although it’s not required to release this information to the public, the current administration has chosen to do so — which makes it especially easy to find out what Kayleigh McEnany’s salary is.

However, a report for 2020 has not yet been released. The 2019 report was published on July 1, 2019 and listed titles and salaries as of June 28, 2019 — well before Kayleigh had been hired as Press Secretary. That being said, it’s probably safe to assume that Kayleigh’s salary is similar to the Press Secretary salary from 2019, when Sarah Huckabee Sanders held the role. (Stephanie Grisham — Sarah’s successor — started on July 1, 2019).

On January 26, 2021, one week after Donal Trump Presidency ended, Kayleigh revealed she had been hired by Fox News. As part of her hiring, she had to release a Federal financial disclosure. That disclosure revealed that in 2020 Kayleigh earned the following amounts:

McEnany is also an author. Her book, The New American Revolution: The Making of a Populist Movement was published in 2018. The book focuses on the Trump campaign, and McEnany interviewed a number of voters across the country and people close to Trump for the book. “The New American Revolution chronicles both the losses of these grassroots voters, as well as their ultimate victory in November 2016,” reads the book’s description on Amazon. “Kayleigh also includes interviews with key figures within President Trump’s administration… and their experiences on the road leading up to President Trump’s historic win.”

During the Trump presidency, McEnany also wrote a book called “The New American Revolution: The Making of a Populist Movement.” The press secretary also double-dipped and worked for the Donald Trump For President Campaign, which was separate from her White House job, earning $167,962, according to Celebrity Net Worth.

When Donald Trump left office, McEnany went back to her TV roots and accepted a job as a Fox News commentator, with her net worth reported at $500,000.