Zelensky was born to Jewish parents in the industrial metropolis of Kryvyy Rih in southern Ukraine. When he was a small child, his family relocated to Erdenet, Mongolia, for four years before returning to Kryvyy Rih, where Zelensky entered school. Like many people from Ukraine’s Dnipropetrovsk region, he grew up as a native Russian speaker, but he also acquired fluency in both Ukrainian and English. In 1995 he entered Kryvyy Rih Economic Institute, the local campus of Kyiv National Economic University, and in 2000 he graduated with a law degree.

Although Zelensky was licensed to practice law, his career was already headed in a different direction. While still a student, he had become active in theatre, and this would become his primary focus. In 1997 his performance group, Kvartal 95 (“Quarter 95,” the neighbourhood in central Kryvyy Rih where Zelensky spent his childhood), appeared in the televised finals of KVN (Klub vesyólykh i nakhódchivykh; “Club of the Funny and Inventive People”), a popular improvisational comedy competition that was broadcast throughout the Commonwealth of Independent States.

Zelensky and Kvartal 95 became regulars on KVN, and they appeared on the program until 2003. That year Zelensky cofounded Studio Kvartal 95, a production company that would become one of Ukraine’s most successful and prolific entertainment studios. Zelensky would serve as artistic director of Studio Kvartal 95 from the company’s creation until 2011, when he was named general producer of the Ukrainian television channel Inter TV. 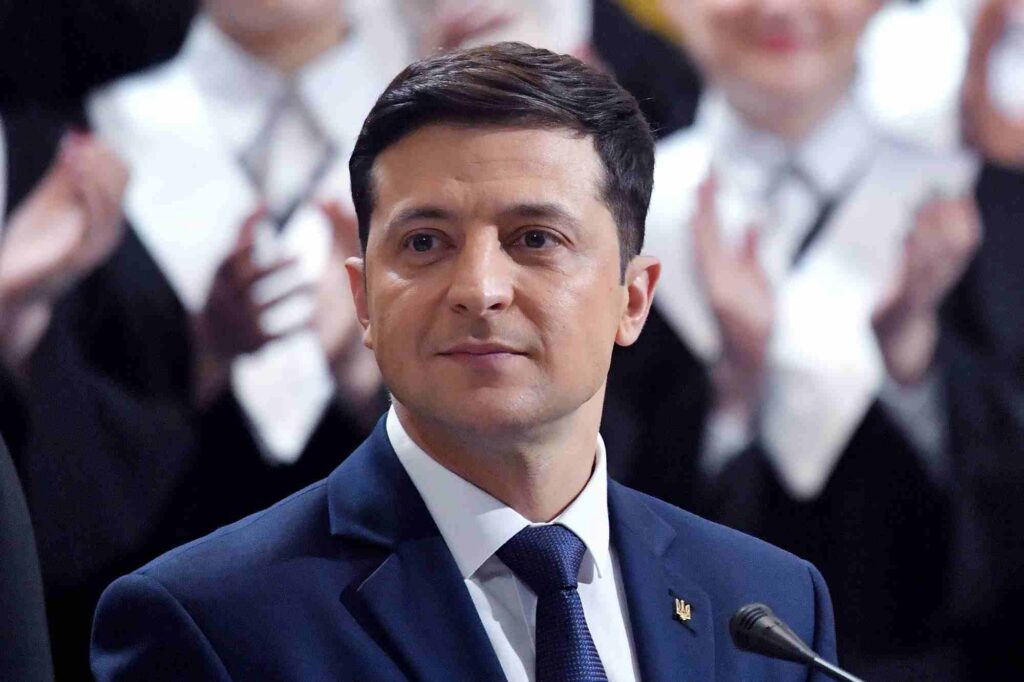 Zelensky left Inter TV in 2012, and in October of that year he and Kvartal 95 concluded a joint production agreement with the Ukrainian network 1+1. That network was owned by Ihor Kolomoisky, one of the wealthiest people in Ukraine, and the relationship between Zelensky and Kolomoisky would become the subject of scrutiny when Zelensky declared his intention to enter politics. In addition to working in television during this period, Zelensky appeared in a number of feature films, including the historical farce Rzhevskiy Versus Napoleon (2012) and the romantic comedies 8 First Dates (2012) and 8 New Dates (2015).

Zelenskyy attended school in Kryvyy Rih. He later attended Kryvyi Rih Institute of Economics, then a department of Kyiv National Economic University and now part of Kryvyi Rih National University. He earned a law degree from here, however, he never worked in the legal field.

Zelenskyy instead went into the entertainment field, becoming a comedian. He spent many years with the Kvartal 95, comedy troupe. He also starred in several TV shows and feature films.

However, his most famous role was in ‘Servant of the People,’ a TV show which aired between 2015 and 2019. In the show, Zelenskyy played a high-school history teacher in his 30s who won the presidential election after a viral video showed him ranting against the Ukrainian government. The show tackled corruption within the Ukrainian government and became a huge hit among the people of the country.

The year the show ended, Zelenskyy announced his candidature for the presidential position.

Zelensky’s ascend in politics came aside a tumultuous period in the history of Ukraine. In 2014, Russia seized Crimea and supported the separatist movement in East Ukraine. The same year, the then-president Viktor Yanukovych was ousted from office following massive protests. Petro Poroshenko became the President of fragile Ukraine in 2014.

It was the ‘anti-corruption’ sentiment among the population that paved for Zelenskyy, who portrayed himself as an anti-corruption leader in ‘Servant of the People’, to eventually become the leader of the country.

In 2019, he contested the election for the post of President and decisively defeated incumbent Poroshenko. Zelenskyy’s victory was a landslide as he gained 73.2% of the votes. On May 20, 2019, he was sworn in as the sixth President of Ukraine.

In September 2003 Zelensky married Olena Kiyashko. They both attended the same school. According to Zelenska she and her husband grew up in an overtly and predominantly Russian-speaking environment and had no relatives who spoke Ukrainian, except for ones who used Surzhyk, a sociolect of Ukrainian and Russian. 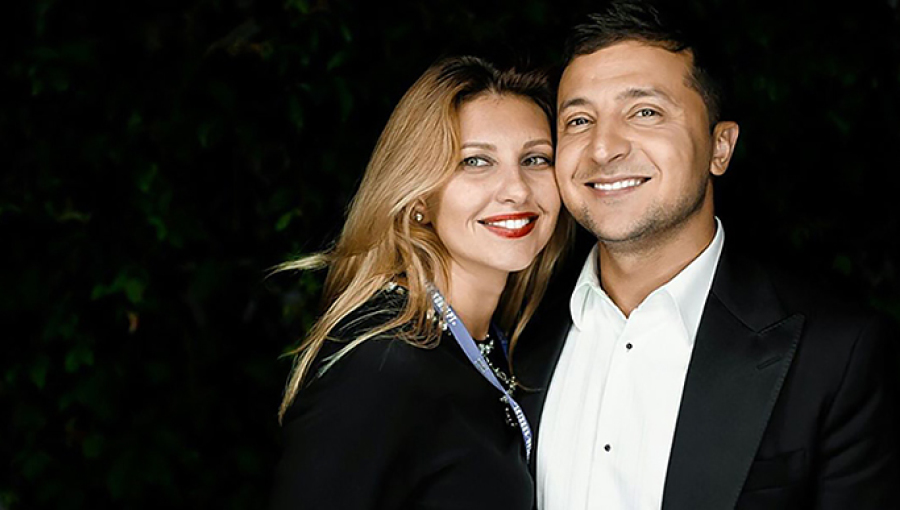 On April 21 Zelensky was elected president of Ukraine with an impressive 73 percent of the vote. Within days the president-elect faced his first foreign policy challenge, when Putin announced his decision to offer Russian passports to the Ukrainian citizens in separatist-controlled areas of war-torn eastern Ukraine. The Russian-backed hybrid war there was entering its fifth year, and hundreds of thousands of Ukrainians had been displaced by the conflict. Volodymyr Zelenskyy ridiculed the offer, responding with a Facebook post that extended Ukrainian citizenship to Russians and others “who suffer from authoritarian or corrupt regimes.”

On May 20, 2019, Zelensky was sworn in as president. He used his inaugural address, which he delivered in a mix of Russian and Ukrainian, to call for national unity and to announce the dissolution of the Verkhovna Rada (Supreme Council). This move was politically necessary: his presidential victory did not confer a legislative mandate, as Servant of the People did not occupy any parliamentary seats.

Snap elections were held on July 21, and Volodymyr Zelenskyy himself characterized the contest as “maybe more important than the presidential election.” Servant of the People won an absolute majority, capturing 254 of 450 seats (26 seats, representing Crimea—a Ukrainian autonomous republic that was illegally annexed by Russia in 2014—and the war zone in the east, were not contested). The result marked the first time in Ukraine’s post-Soviet history that a single party could command absolute control over the legislative agenda.

While Zelensky worked to build his new administration, ties to his former business partner again became the subject of scrutiny. Kolomoisky’s media empire had provided a valuable platform for Zelensky during the presidential campaign, but Zelensky vowed that no special favours would be granted by his office. Kolomoisky himself had returned to Ukraine just days before Zelensky’s inauguration; the billionaire stated that he would not act as a “grey cardinal,” directing policy from behind the scenes. 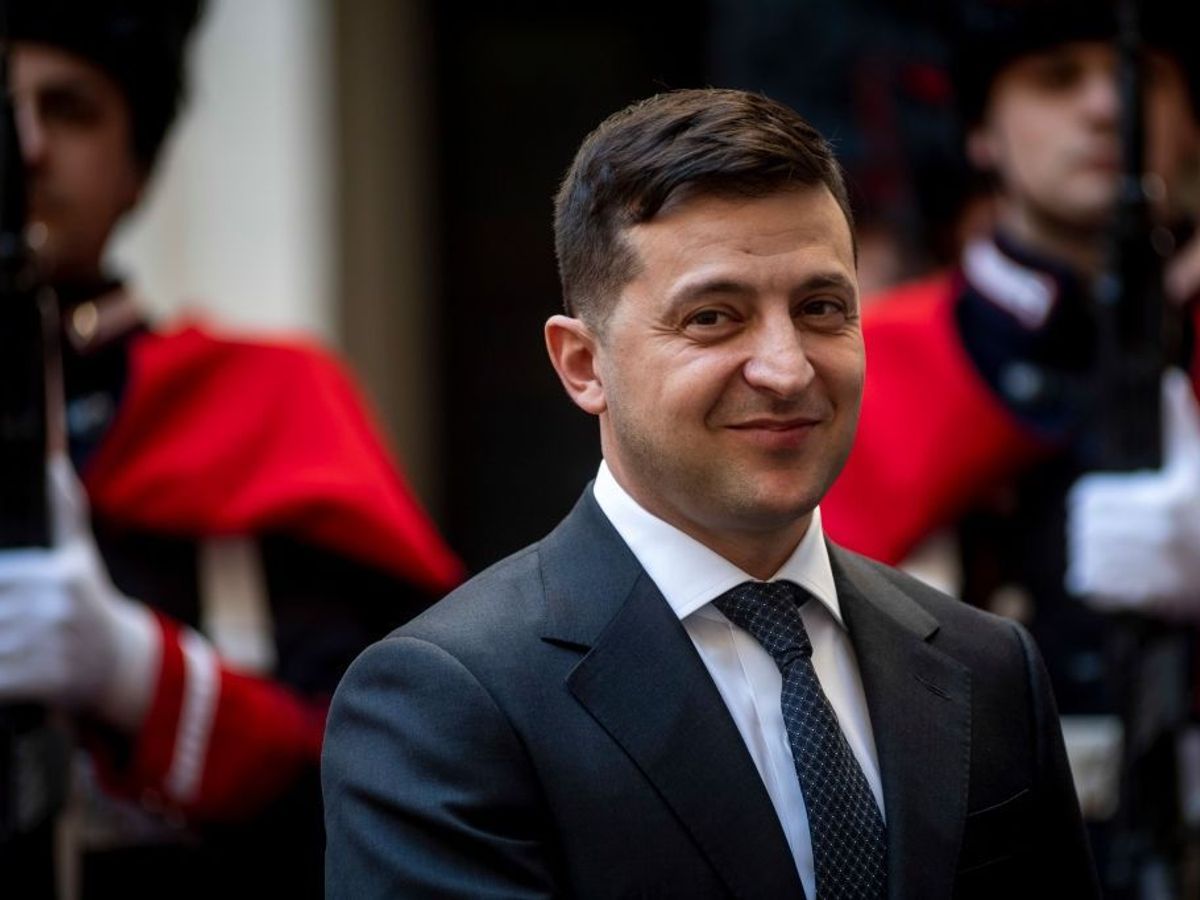 Before becoming president of Ukraine, Zelenskyy’s political experience was limited to playing Ukraine’s president on the popular satirical TV series he created and produced, Servant of the People. (In the series, Volodymyr Zelenskyy starred as a teacher who inadvertently became president. The series ended the same year Zelenskyy became the actual president.) The comedian and actor—who trained as a lawyer before veering into show business and eventually politics—was kind of a Jon Stewart–type figure in Ukraine.

It’s an unlikely backstory for a politician, even in a post-Trump world—but the internet’s collective mind was blown when Hugh Bonneville pointed out on Twitter that Zelenskyy also voiced Paddington Bear in the Ukrainian version of the animated children’s film. Perhaps even more incredibly, Zelenskyy not only competed in Ukraine’s version of Dancing With the Stars back in 2006, but won the competition after competing in hot pink, fringed bell-bottoms, and at another point, in a blindfold.

But dear readers, Zelenskyy’s entertainment résumé extends even beyond his competition-winning cha-cha. Because, for about a decade before becoming president, Zelenskyy was busy acting as a romantic-comedy lead. Ahead, a look back at his work in the rom-com realm.

Cowritten by Volodymyr Zelenskyy himself, 2009’s No Love in the City is set in New York and stars the future Ukrainian politician as a promiscuous dentist who, with two fellow expats, enjoys a hedonistic lifestyle in America until a man (specifically, according to bluray.com, “a drunken Russian nightclub owner”) puts a curse on all three, sapping them of their virility. After many comedic attempts to reclaim their machismo, they discover that the nightclub owner was St. Valentine himself(!) and that they can have sex, but only with a person whom they truly love. (Also worth mentioning: There is a scene in which Zelenskyy goes to a Times Square strip club wearing a white bucket hat.)

The film was enough of a commercial success to warrant a 2010 sequel despite only earning a 50% audience score on Rotten Tomatoes. On the Russian movie board Kinopoisk, some viewers deemed it “a pleasant surprise.” Others, however, criticized the film for a plot they considered a Sex and the City rip-off, repackaged for men. Wrote one viewer (in a message translated by Google), “In Hollywood, too many do not shine with acting skills. But at least there the stars are charismatic and can revive the film!”

Volodymyr Zelenskyy made his feature directorial debut with Me. You. He. She., which he codirected with David Dodson. Zelenskyy stars in the film as a man who has to live with the woman he is divorcing. According to one review from the Yabl blog, translated by Google, the film features a lackluster plot and a scene at McDonald’s in which husband and wife perform an unsolicited reading of poet Ivan Franko’s work, while under the influence, to a group of ungrateful teenagers. Searching for positive attributes about the film, the critic kindly notes (via Google Translate), “Volodymyr Zelenskyy has beautiful legs (without irony, holy truth: we think so!).” (“Zelenskyy has beautiful legs” is pull-quoted in the piece.) The writer also gently suggests that, going forward, “Volodymyr Zelenskyy try different acting devices.”

The film, which has a 5.2 rating on IMDB, was released in Ukrainian theaters in 2018, the year before Volodymyr Zelenskyy became president.

Coincidentally, Zelenskyy’s feature-acting work went unrecognized by most in the U.S.—until last week’s display of strength in Ukraine. This weekend, after earning war-hero status, he was even name-checked at Hollywood’s epicenter—during the SAG Awards—by two of the acting greats: Brian Cox and Michael Keaton.

“The president of Ukraine was a comic,” said Cox, while accepting the award—with his Succession castmates—for best ensemble in a drama series. “He was a wonderful comic performer. And we should respect that for him. And to come to the presidency is amazing. But the thing that’s really distressed me is what’s happening in Russia to my fellow actors and actresses and performers and writers and critics. They are told, under pain of high treason, that they cannot say a word about Ukraine. And I think that is pretty awful. And I think we should all stand together.”

In late 2021 Russia began a massive buildup of troops and matériel along its border with Ukraine. Additional Russian forces were sent to Belarus—ostensibly for joint exercises with that country’s military—and a sizable Russian naval flotilla was assembled in the Black Sea. Western intelligence agencies stated that the moves were a clear precursor to an invasion, but Putin denied any such intent. Western leaders carried on negotiations with both Putin and Zelensky in an effort to prevent the bloodshed that appeared inevitable, but Russia’s military preparations continued.

On February 21, 2022, Putin announced that he would recognize the independence of the self-proclaimed people’s republics of Donetsk and Luhansk and dispatch “peacekeepers” to both regions. Western leaders responded by leveling a new round of sanctions, and, in the early morning hours of February 24, Zelensky delivered a televised plea for peace directly to the Russian people. Shortly thereafter, at about 6:00 AM Moscow time, Putin announced the beginning of a “special military operation,” and Russian cruise missiles began to rain down on targets in Ukraine. 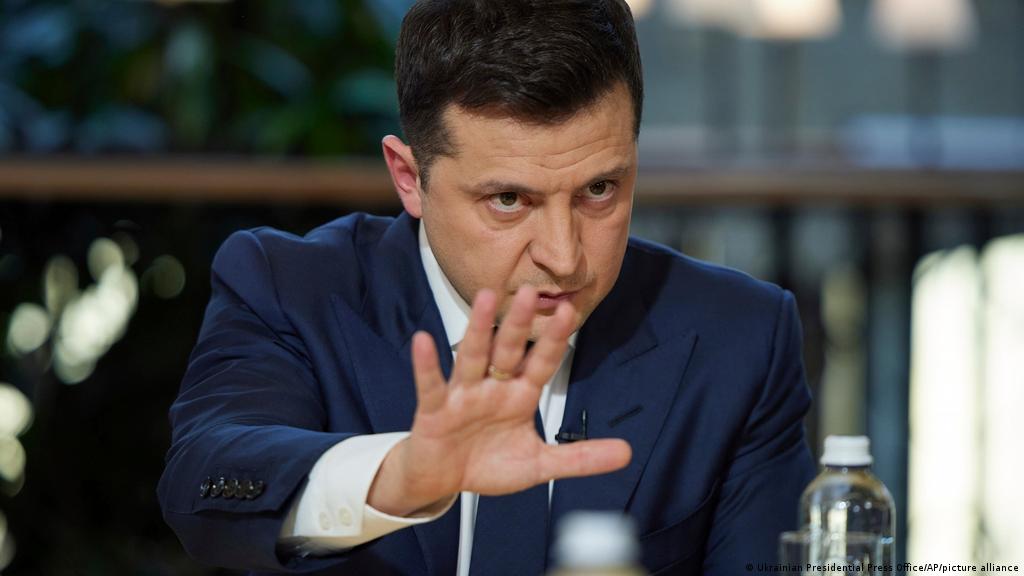 The unprovoked attack drew condemnation from leaders around the world, and Zelensky tried to rally support from the international community. Russian troops and armoured vehicles poured into Ukraine from Russia, Russian-occupied Crimea, and Belarus, and scores of military personnel and civilians were killed in the first day of fighting. As world leaders announced increasingly tough sanctions against Russia, Zelensky tried to rally support from abroad, warning that a “new Iron Curtain” was descending on Europe.