Yash who is originally called Naveen Kumar Gowda, is an Indian actor who works mainly in Kannada language films. He is one of the most successful and highest-paid actors in the Kannada film industry. He made his debut with Moggina Manasu. Yash made his film debut in 2007 with Jambada Hudugi, playing a supporting role in the film.

In his second film, Moggina Manasu, he played the male lead opposite Radhika Pandit. The film emerged as a commercial success and earned him the Filmfare Award for Best Supporting Actor. Yash went on to star in many commercially successful films such as Modalasala, Rajadhani, Kirataka, Lucky, Jaanu, Drama, Googly, Raja Huli, Gajakesari, Mr and Mrs Ramachari, Masterpiece, etc. With a successful track record of hits, Yash has established himself as one of the bankable stars in the Kannada film industry.

Naveen Kumar Gowda aka Yash was born on 8 January 1986. He was born to Kannada speaking community in Bhuvanahalli is a village near by Hassan city Hassan district of Karnataka. His father, Arun Kumar J. worked in the KSRTC transport service, and later in the BMTC transport service as a driver, and his mother, Pushpa, is a homemaker. He has a younger sister, Nandini. His childhood days were spent in Mysore, where he did his pre university course (PUC) in Mahajana Education Society (MES), and after finishing his studies, he joined the Benaka drama troupe which was formed by noted dramatist B. V. Karanth.

Yash started his acting career with the teleserial Nanda Gokula directed by Ashok Kashyap, which aired on ETV Kannada. He went on to appear in several other teleserials such as Malebillu and Preeti Illada Mele. His performance in Preeti Illada Mele was much appreciated. Yash stepped into the Kannada silver screen with a small role in the Priya Hassan directed film, Jambhada Hudugi in 2007, which went unnoticed by a large section of the audience.

He then acted in Moggina Manasu directed by Shashank in 2008, where he was paired opposite his Nanda Gokula co-star Radhika Pandit. It was not a full-fledged role, however, the role brought him much recognition. He won the Filmfare Award for Best Supporting Actor for his performance in the film. Yash then starred in lead roles in critically acclaimed films like Rocky (2008), Kallara Santhe (2009), Gokula (2009), etc. 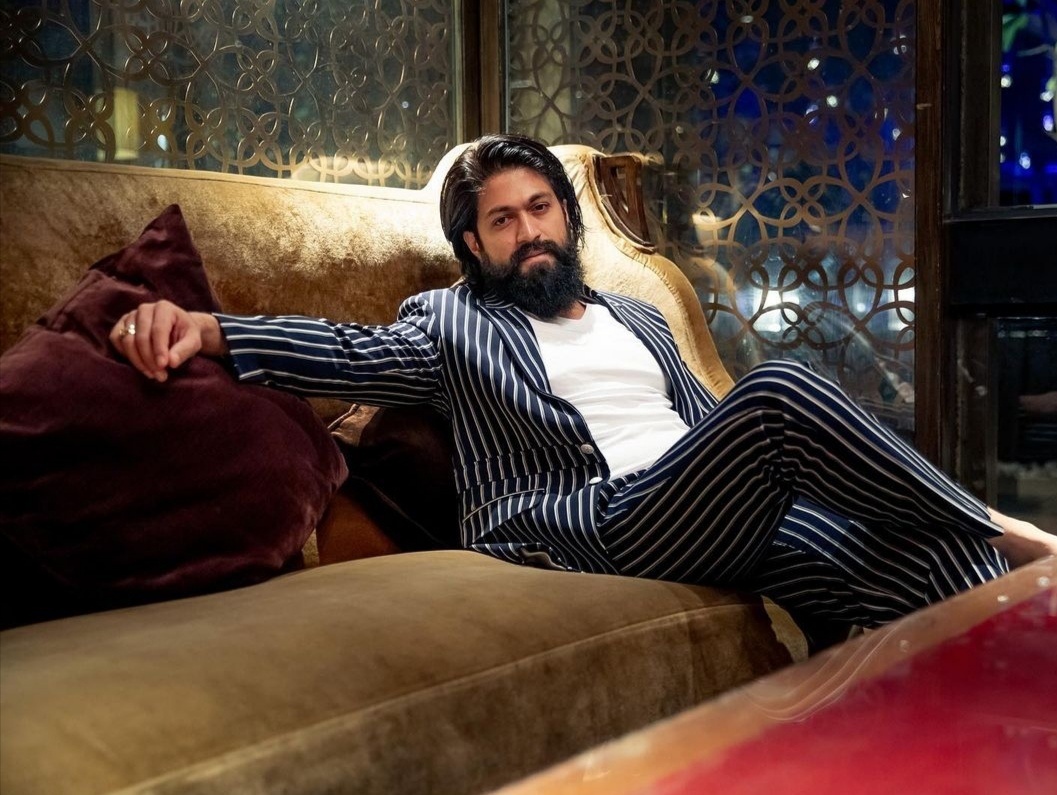 In 2010, Yash starred in Modalasala, which became his first commercial solo hit. Yash’s performance in the lover boy role was well received. His next film was Rajadhani in 2011, which got good reviews and Yash’s performance was critically acclaimed although the film was below average at the box office. The same year, his next film Kirataka was a huge success and turned out to be his first commercial super hit. Yash received positive reviews for his performance in the village comedy film. The film made Yash popular, among the masses. In 2012, Yash had two major releases, Lucky (opposite Ramya) and Jaanu, both of which were much anticipated but met with mixed response upon release and became average grossers at the box office.

His next film of the same year, the romantic comedy Drama directed by Yograj Bhat released with a grand opening and was a major commercial success. The film was declared as a blockbuster and one of the major grossers of 2012. The film elevated Yash to a star status and established a loyal youth fan following for the actor, including many female fans. His next movie Googly opposite Kriti Kharbanda and directed by Pawan Wadeyar released on 19 July, 2013. The film recorded a huge opening and emerged as a blockbuster at the box office. The film’s opening and success proved that Yash has a huge fan base among the youngsters and is emerging as the next big star of Sandalwood.

Yash’s much anticipated Raja Huli, directed by Guru Deshpande with music direction by Nadabrahma Hamsalekha released on 1 November 2013, on the Kannada Rajyothsava Day. A remake of Sasikumar’s Tamil movie Sundarapandian, the movie went on to become a big hit, mainly due to the Mandya-Kannada Slang being used to perfection in the movie. Raja Huli is along the lines of his earlier hit, Kirataka.

Be it in single screen or multiplex, Gajakesari was most sought-after movie by the cine-goers, since the lead actor Yash is the most happening star in Sandalwood. By releasing in more than 180 screens, Gajakesari did wonderful business by breaking all the previous records of early Kannada movies. In the first weekend itself, movie had approximately collected 5.5 crores at the box office.

Yash is also starring in Googly 2, to be directed by Pawan Wadeyar banking on the success of its prequel Googly. His movie Masterpiece first look teaser released on the eve of his birthday on Jan 8th, 2015. He also has signed the movie KGF under Ugramm fame director Prashant Neel.

Yash Movies and Awards Information Below

Yash Father name is Arun Kumar and He is a Used to Work in BMTC. Yash Mother name is Pushpa (Homemaker). Yash has one sister her name is Nandini and he has no brothers. Yash wife name is Radhika Pandit. 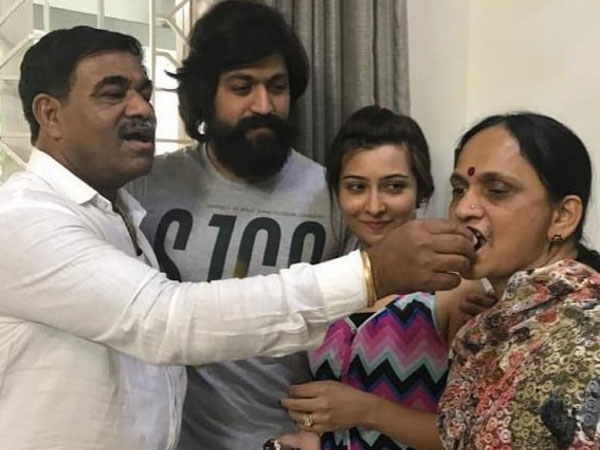 Yash is married to Radhika Pandit. The couple, after being together for several years, got married on 9th December, 2016.

It was speculated in the media that Yash had been in a relationship with actress Radhika Pandit for long, and especially after their film, Mr. and Mrs. Ramachari, that saw them portray the lead pair, and their third time together in films. Before the two disclosed it in public, their engagement took place in Goa on 12 August 2016. They married on 9 December 2016 in a private ceremony in Bangalore, while Yash had openly invited everyone from Karnataka for their reception at Bangalore Palace. They have a daughter and son.

Radhika Pandit is an Indian film and former television actress . She was born on 7 March 1984 in Bangalore Palace Nursing Home, in the Malleswaram suburb of Bangalore.She completed her education in Cluny Convent High School, Bangalore, and later pursued degree B. Com at the Mount Carmel College Bangalore.Radhika  began her acting career with the film “Moggina Manasu”.

For this movie she has got Filmfare award of best debut actress. She won the latter award again for her performances in Love Guru (2009) and Krishnan Love Story (2010).Radhika Pandit got engaged to actor Yash in Goa on 12th August 2016. They both got married on 9th December 2016.

In 2017 Yash along with his actress wife Radhika Pandit founded an organization and named it as Yasho Marga Foundation which marks their contribution towards the betterment of the society. As a first step, the foundation took up the water crisis issue in Koppal district of Karnataka by reportedly investing ₹4 crores towards the desalination of the lakes and providing pure drinking water to the drought affected areas. 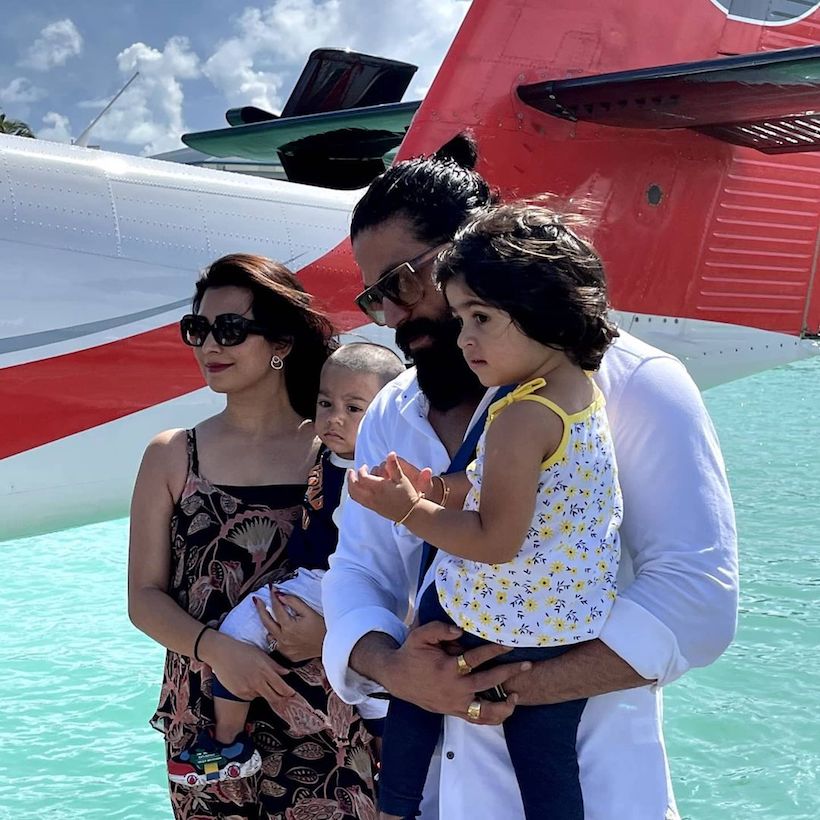 The total net worth of Yash is estimated to be 4 Million USD, which in Indian Currency is approximately equal to 30 Crore Indian Rupee (i.e approx Thirty Crore INR). The majority of Yash’s earnings come from movies, ads and brand endorsement. Yash also takes home the profit share from his movies apart from his acting fees. He takes a huge sum of money for brand endorsement.

Yash Resides in the prime locality of Karnataka. Estimated Value of this Real Estate Property around Rs.5 Crores. The Car collection of Yash is Quite Large. Yash owns a few of the best luxury cars in the world. The Car brands owned by Yash include Range Rover, Mercedes Benz and Audi.

vijesh - 0
Srinidhi Shetty is an Indian model, actress and beauty pageant titleholder. She was crowned as Miss Supranational India in the 2016 Miss Diva pageant...