Adam Demos is an Australian actor best known for his roles as August Walker on the American television series Unreal and Brad in the Netflix series Sex/Life. Adam Demos was born in Wollongong, New South Wales, Australia. His mother Lindy Demos is of Greek descent. He attended Tarrawanna Public School and graduated from Dapto High School in 2003. He is a cousin of Australian basketball player Tyson Demos.

Although Demos was interested in acting at an early age, he first worked as a construction laborer in his father’s demolition business, the Wollongong steelworks, a roofing company, and in Bondi’s Hotel Ravesis. He enrolled in an acting class at Screenwise Film & TV Acting School in Sydney when he was 23, but was worried his friends would mock him so kept it a secret. His mother encouraged him to pursue acting.

In 2012, Demos played the role of ‘Solo Man’ in the iconic advertising for the Australian soft drink brand.

Demos previously played small roles in Australia when his big break came. In 2017, Demos was cast to play Nate Baldwin in the ABC Australia drama Janet King. On the set, Demos found out about a role in Hollywood explicitly written for an Australian actor. He got the gig and flew to Vancouver to start filming the third season of Lifetime’s UnREAL. Demos stated that it was a confusing experience filming UnREAL, his first international production, as it was a TV show within a TV show. 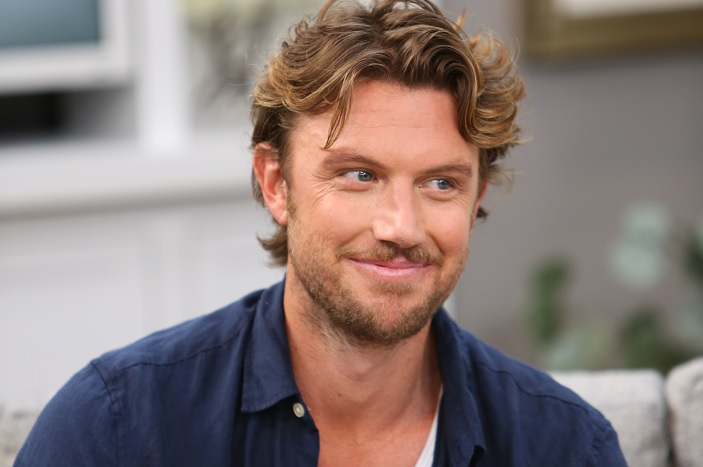 In 2019, Demos starred opposite Christina Milian in Netflix’s Falling Inn Love which was shot in New Zealand.

In 2020, Demos filmed the Netflix series Sex/Life, inspired by the book 44 Chapters About 4 Men by BB Easton, in Toronto, Canada. Demos was cast in the show with the help of Stacy Rukeyser, whom he had worked with on UnREAL and was the showrunner for Sex/Life. To prepare for the scene where he sings “Heartbeats”, Demos took singing and guitar lessons. His full-frontal nude scene in episode 3 of the series went viral on social media platforms.

In May 2022, A Perfect Pairing was released on Netflix, starring Victoria Justice alongside Demos. The film tells the story of an American wine company executive who travels to Australia to land a major client and ends up sparking a connection with a man she meets on a sheep farm.

In 2020 when Adam was involved in making “Sex/Life,” he got to work with an actress of Irani origin named Sarah Shahi. They both became excellent friends and started spending time with each other. Long story short, the artist is currently in a relationship and is living together in their home.

There are chances they might get married soon, and there were rumors at the beginning of 2022 that they are planning to tie knots. Adam is not a vivid lover of social media platforms, but he keeps his fans updated regarding his upcoming projects. There are more than a million people who follow Demos’ Instagram.

Demos’ sweetheart was previously married to someone else. She tied the knot with actor Steve Howey. The former duo shared vows on February 7, 2009, in Las Vegas, and the same year they welcomed their first baby, a son, William Wolf Howey. Subsequently, they also gave birth to twins, a daughter, Violet Moon Howey, and a son, Knox Blue Howey.

Demos’ girlfriend Shahi and her then-husband Howey filed for divorce in May 2020. Following that, they legally parted ways after their divorce was finalized in January 2021.

Adam Demos’s net worth is $500,000. After graduating from acting school, the initial phase of his career saw Demos playing one-offs and cameos in individual episodes of numerous TV series. Some of the earliest ones were ‘Home and Away’, ‘Rescue: Special Op’, and ‘Aboriginal Heart’.

Demos’s television appearances became more and more frequent, but his big breakthrough arrived in 2017 when he was cast in the Australian drama ‘Janet King’, which would air in the US on ABC. The ‘Crownies’ spin-off saw Demos play the role of Nate Baldwin, which turned out to be a boost for his career in television.

While starring in ‘Janet King’, Demos learned about the producers looking for an Australian actor for ‘UnREAL’. Demos bagged the role and went on to return for its next season too. His stint with Netflix began in 2019, when he was cast as the hero Jay Taylor for the series ‘Falling Inn Love’. The show garnered incredible popularity and so did Demos as the lead. By the time 2020 had rolled in, Demos was already cast as one of the leads in ‘Sex/Life’ that stars Sarah Shahi and Mike Vogel as the golden trio in a love triangle.