Mila Kunis is an American actress. In 1991, at the age of seven, she and her Jewish family fled from Soviet Ukraine to the United States. At age 14, Kunis began playing Jackie Burkhart on the Fox television series That ’70s Show. Since 1999, she has voiced Meg Griffin on the Fox animated series Family Guy. Mila Kunis was born Milena Markovna Kunis (Ukrainian: Miléna Márkivna Kúnis, Russian: Miléna Márkovna Kúnis) to a Jewish family in Chernivtsi, Ukraine, USSR (now independent Ukraine). The spoken language in her family is Russian, not Ukrainian.

Her mother, Elvira, is a physics teacher, her father, Mark Kunis, is a mechanical engineer, and she has an older brother named Michael. Her family moved to Los Angeles, California, in 1991. After attending one semester of college between gigs, she realized that she wanted to act for the rest of her life. She started acting when she was nine years old, when her father heard about an acting class on the radio and decided to enroll Mila in it. There, she met her future agent. Her first gig was when she played a character named Melinda in Make a Wish, Molly (1995). From there, her career skyrocketed into big-budget films.

Although she is mostly known for playing Jackie Burkhart on That ’70s Show (1998), she has shown the world that she can do so much more. Since 1999, she provided the voice of self-conscious daughter Meg Griffin on the animated sitcom Family Guy (1999). Her breakthrough film was Forgetting Sarah Marshall (2008), in which she played a free-spirited character named Rachel Jansen. She has since starred or co-starred in the films Max Payne (2008), The Book of Eli (2010), Black Swan (2010), Friends with Benefits (2011), Ted (2012) and Oz the Great and Powerful (2013).

Mila Kunis is married to actor Ashton Kutcher, with whom she has two children. 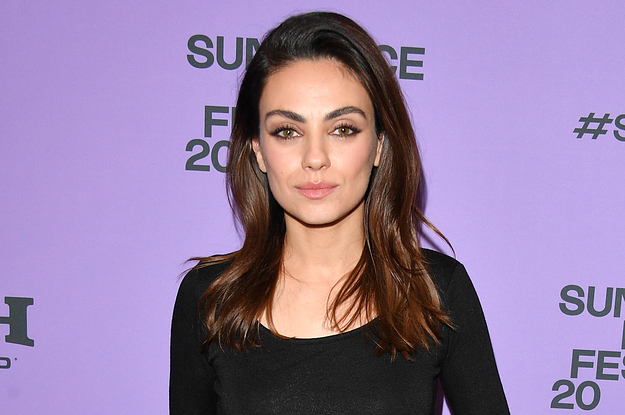 Ashton Kutcher and Mila Kunis made That ‘70s Show fans’ dreams come true when they began dating in 2012.

The costars appeared as Michael Kelso and Jackie Burkhart from 1998 to 2006. Kutcher married Demi Moore in September 2005, but their relationship ended six years later. They finalized their divorce in November 2013.

After reconnecting, the Ranch star and Kunis shifted their friendship into a full-fledged romance in 2012. The twosome got engaged in February 2014 and tied the knot in July 2015. In the meantime, they welcomed daughter Wyatt in October 2014 and son Dimitri in November 2016.

“I did a movie called Friends With Benefits. He did a movie that was very similar: No Strings Attached,” the actress recalled on the “WTF” podcast in July 2018. “We lived our movies out, where we were like, ‘Let’s just hook up. Let’s have fun. We’re both single. We both trust each other. Everything’s great.’ None of us wanted tension. OK, great. We hooked up for three months. And just like our movies, one of us caught feelings.”

Kunis got jealous when Kutcher revealed he was dating someone else. After admitting her realization to him, he asked her to move in with him. 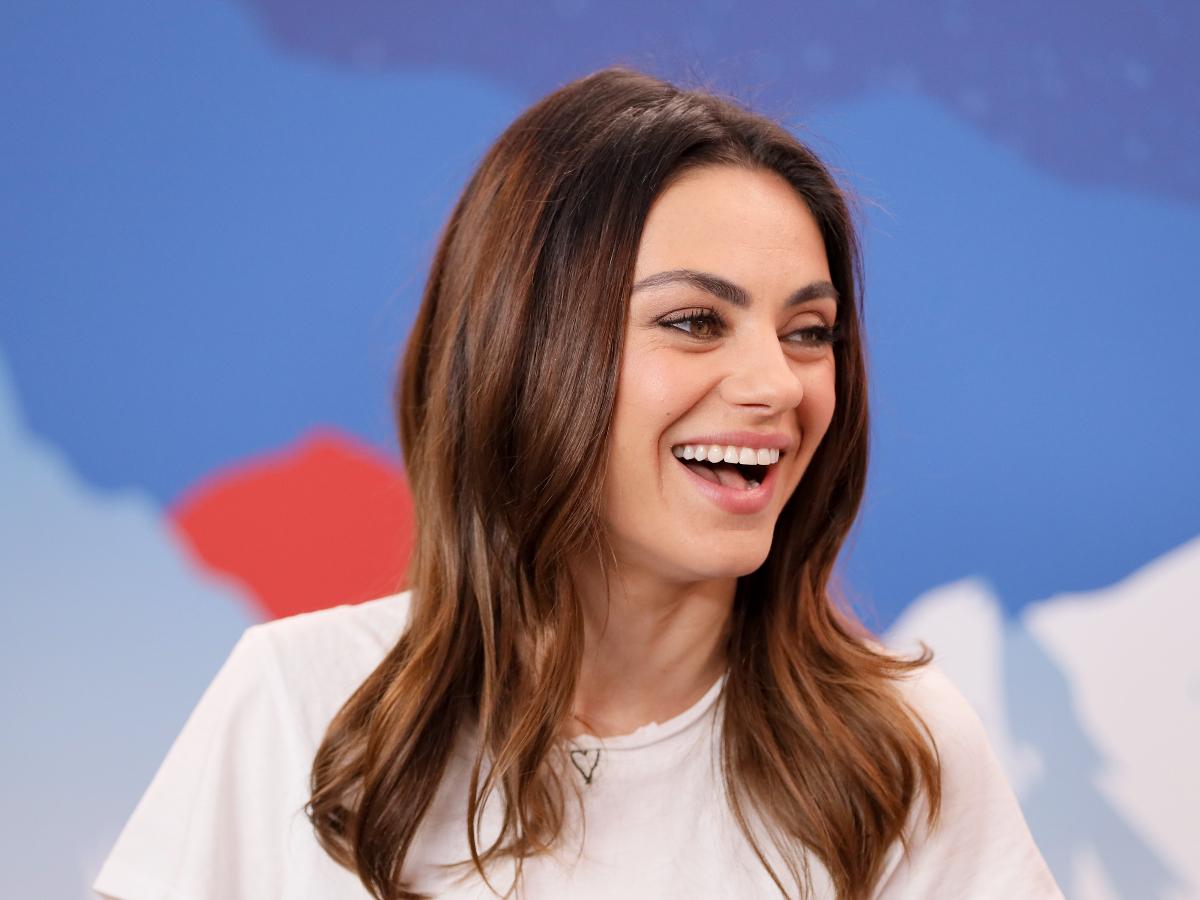 She later pointed out that they forged ahead despite public perception and events from previous relationships. “We went into this relationship super transparent with one another, so we knew 100 percent each other’s faults, we knew exactly who we were,” she explained on the “Armchair Expert” podcast in July 2018. “And we were like, ‘I accept you for who you are.’”

The Bad Moms star noted in August 2018 that their onscreen collaborations were likely in the past. “Probably not going to happen,” she confessed on Sunday TODAY With Willie Geist. “I can’t look at him and not be like, ‘What are you doing?’ It’s like a weird — no, no, it’s weird.”

Kutcher and Kunis met on the set of the 1998 hit comedy series That ’70s Show. The onscreen couple attended the 50th annual Primetime Emmy Awards with costars Wilmer Valderrama, Topher Grace, Laura Prepon and Danny Masterson at the Shrine Auditorium in L.A. 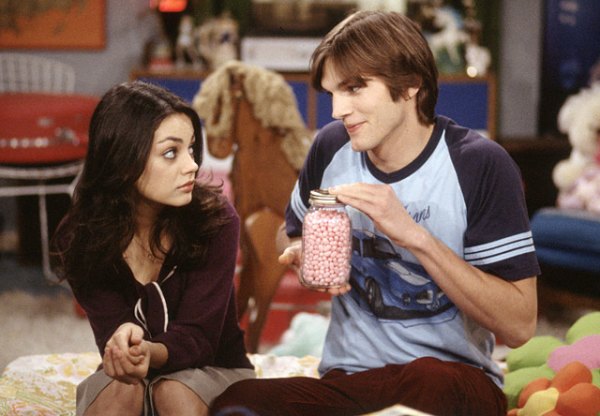 In the Season 5 episode “Immigrant Song,” Michel Kelso (Kutcher) tries to win back Jackie Burkhart (Kunis). The actress, who shared her first kiss with Kutcher on That ’70s Show, confessed on The Tonight Show With Jay Leno in June 2012 that she lied about her age to producers to get the part of Jackie. “Legally I was 14, but I told them I was a little bit older,” she said. “I told them I was gonna be 18, which is not technically a lie, cause at one point . . . I was gonna be 18.”

Kutcher and Kunis shared a laugh during the FOX Television Critics Association Press Tour at the Renaissance Hollywood Hotel in Hollywood. “People think Ashton has changed,” Kunis told Parade magazine in October 2007. “He’s still the same old goofball that he used to be.”

After That ’70s Show ended in 2006, the costars caught up at the 7th Annual Chrysalis Butterfly Ball in L.A. Kutcher married Moore in 2005, and Kunis had been dating actor Macaulay Culkin since 2002.

The twosome took their relationship public in August when they went on a romantic vacation together to Bali. The former costars even held hands as they walked through the airport. “Mila is throwing caution to the wind!” a source told Us. “She’s having fun.”

After three years of dating, the couple tied the knot at a private ceremony in Oak Glen, California, on the Fourth of July. Speaking to Glamour in 2016, Mila admitted that she didn’t believe in marriage, however.

“I grew up in West Hollywood, and my brother has reminded me that when I was like 12, I said, ‘When gay people can get married, then I’ll get married.’ I was ahead of my time. The Supreme Court decision [on same-sex marriage came down], and that’s when Ashton and I got married,” she said. 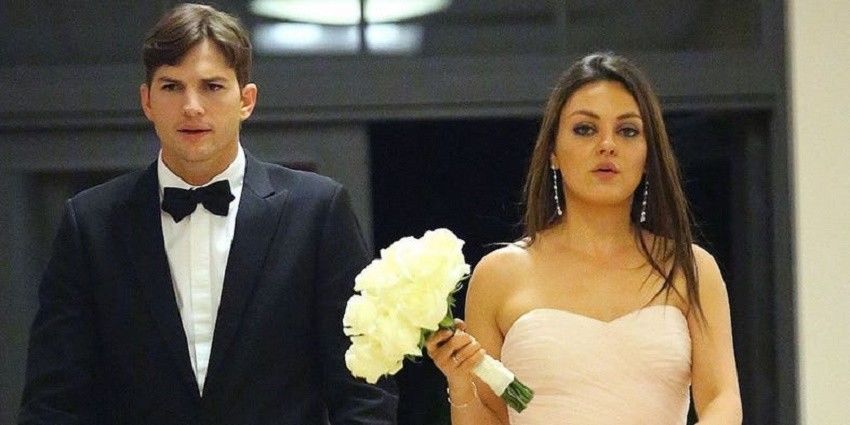 Mila Kunis has a daughter, Wyatt Isabelle, born in October 2014 and a son, Dimitri Portwood, born in November 2016. Mila Kunis brought along daughter Wyatt and son Dimitri for a shopping day in Los Angeles, just days before Christmas in December 2021.

Mila and Ashton, who met on the set of That ’70s Show, are such loving parents to their kids. However, the A-list couple did find themselves at the center of a parenting controversy over the summer, after making some surprising confessions about their kids’ bathing schedules on Dax Shepard and Monica Padman’s Armchair Expert podcast.

On October 1, 2014, the couple welcomed their first child, Wyatt Isabelle Kutcher, at Cedars-Sinai in Los Angeles. Per Us Weekly, Ashton told Conan O’Brien that parenthood is “the greatest thing on earth.” He continues, “We’re really privileged that we have time and can afford to take time. So we don’t have a nanny or a night nurse or any of that stuff. It’s just the two of us.”

The couple welcomed their second child, a son named Dimitri Portwood Kutcher, at the end of 2016, completing their family.

Mila Kunis is a Ukrainian-born actress who has a net worth of $75 million. Although Kunis gained early notoriety for her central role in That 70s Show, she later branched out to become a successful film actress. In addition, Mila Kunis has become an established voice actor who is primarily known for providing the voice of “Meg” on the animated series Family Guy.

The principal Family Guy voice actors each earn $100,000 per episode. That works out to around $2 million per year, per actor. They can earn additional royalties from the sale of DVDs, merchandise and syndication deals. By comparison, the principal voice actors on The Simpsons each earn $300,000 per year but they negotiated a larger deal several years back after threatening to walk away forever.

In June 2017 they paid $10 million for a beachfront home in Carpenteria, California, near Santa Barbara. The property is made up of two houses spread across a combined 3,100-square-feet of interior living space.

Their primary home is a 6-acre property in Beverly Hills that was photographed for Architectural Digest in August 2021. 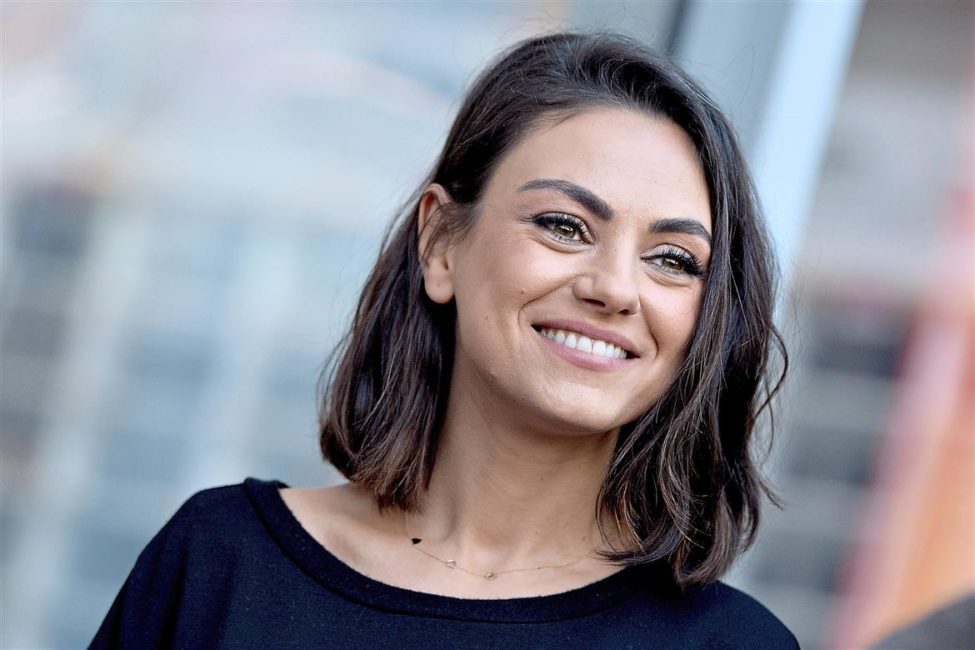